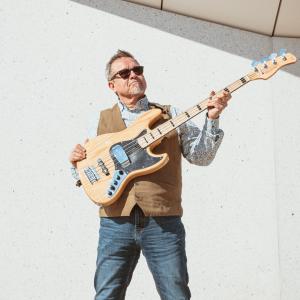 The crib of José-Luis was in Mexico DF. It soon became clear that music would play a major role in his life. As a boy of 8 he already plays guitar and Tres (Cuban guitar with 3x2 strings) accompanied by his uncle. From the age of 15, he studied Latin American folk music for three years and was soon recognized as a talented musician. At the age of 19 he starts with the band 'Son Cuatro Group' where he himself is the lead singer and also plays the tres. Around his 21st birthday, the bass guitar gets his interest and through self-study he learns to play it. His parents insist that he learn a "profession". The bookkeeping diploma is obtained but will never be used. The profession of José is musician and everything that has to do with it. Together with 7 other musicians the 'Rumba Abierto' project is started in 1985, in which the fusion of Mexican and Afro-Antillean music is central. In 1986 José-Luis is invited by Irving Lara, an important Mexican pianist, to join his orchestra 'La Quemazon'. The many years of working together with Irving Lara is a key moment in his career for José-Luis. Latin music and Latin jazz were central and with this orchestra he accompanied many famous artists such as Celia Cruz, Tania Libertat, David Byrne, Mark Anthony, Gualberto Castro and many others. In Pati-PaMi, José-Luis is also important in vocal arrangements in addition to basics and likes to share his great experience in many Latin and Brazilian music.