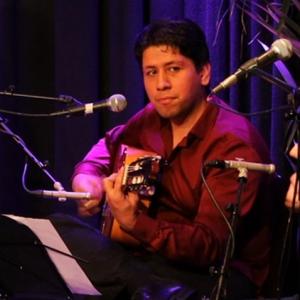 Patricio was born in Chile (Temuca), and grew up in Brussels. He started his classical guitar training at the age of 9 and then perfected his skills with Odair Assad in Mons, where he obtained his Master's degree.

In addition, he was bitten by the Flamenco guitar.

Patricio Grande has his own Flamenco projects with guest musicians from the Flamenco world that knows no boundaries.

He performs as a guitarist at home and abroad. In Belgium, there are projects in Bozar, among others.

Patricio Grande is the new guitar revelation at Pati Pami. In 2018, he took over the role from Antonio Segura at Pati Pami. His beautiful sound and sensitivity fit wonderfully into the sound of the band.