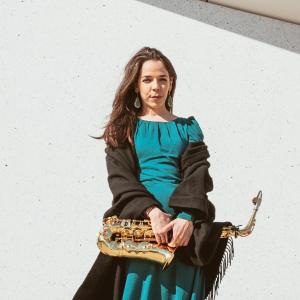 Vanesa(Canary Islands-Spain) sings with great emotional depth and is a natural musician.
She started young studying classical saxophone at the music school in Lanzarote.
During her classical education she was performing in different kinds of ensembles as wind orchestras, latin bands, chamber music ensembles and choirs. She continued her saxophone studies in The Conservatory of Tenerife combining with her university studies on Music Education. At that time she got familiar with improvisation and jazz music and she developed her first composing skills. After getting her degree in Music Education she went to live in Granada where she fell in love with Flamenco music.
In 2012 she moved to The Netherlands to start her Bachelor studies in Jazz/Pop Composition & Arranging(writing music for Film,Theater, Choir or Big band) at the Conservatorium of Maastricht. Since then, she has also performed as a singer and participated in many different projects (Flamenco, Latin, Jazz, Film music, Bigband).
Since 2017 she has lived in Brussels. Obtained her Master's degree in Music( Jazz Composition & arranging) Cum laude under the tutelage of Kris Defoort and Michelino Bisceglia.

Since October 2019 she has been performing with Pati Pami as Lead singer and saxophonist.